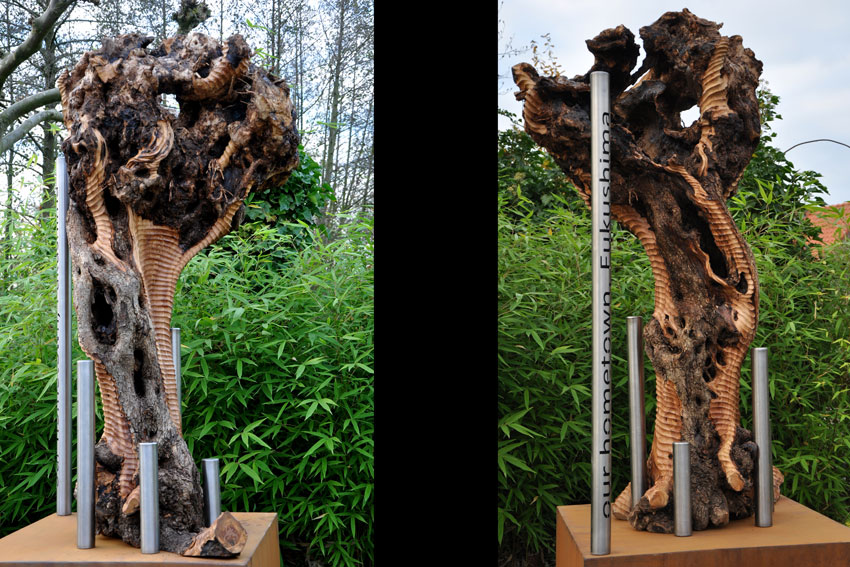 10 Gogyoshi’s form the basis of approximately 100 visual works. The Japanese poet/writer Taro Aizu has written these Gogyoshi (Japanese Poetry). About 60 artists coming from all provinces of the Netherlands were inspired by these poems

On 17 November at 16.00 #loods32, Zeilweg 32 te Lelystad  is the first opening exhibition where a large part of these works can be admired. Mr Job Fackeldey, Alderman Arts and Culture Municipality of Lelystad, will officially open the exhibition.

The nuclear disaster, more than a year ago, in Fukushima Japan was the reason for the poems of Taro Aizu. Ed Hanssen en Fred van Welie have adopted this project for the Netherlands. By province, they have asked a minimum of 2, to a maximum of 8 artists to be inspired by a poem of Taro Aizu.

But some old farmers near the plant did not wish to seek refuge elsewhere, whether they were wealthy or not. They neither wanted to learn new dialects, new customs nor leave their neighbors and friends. They remained to live out their last years.Though officials say
“Flee from your village!”,
old farmers refuse as they want to stay calmly
in their hometown, Fukushima.

But the old farmers
like trees
have thick roots
deep in the earth
of Fukushima.

Through Fukushima,
the old farmers
want to return
to their true hometown:
The Earth itself.

The Earth
is the dark haven
where they revive
in the future :
their next stages.

During the study of this project, I have been guided by a few words in this poem as roots, officials, trees, dark haven, the Earth itself etc.

I have engrossed me in the impact of a nuclear disaster. What are the immediate consequences and what could be follow years later? The impact is big, all and everyone has or will have to do with it. Often is forgotten that the animals in that area heavily affected to.

When you are reading about such a disaster you do see much distress, what really touched me. I would like to process into my work, but have limited myself because the assignment was to depict the poem. However, you can find in my work the capriciousness and contrasts  that shows that there is a deeper thought behind this Gogyoshi, just like the poem.

What I have depicted is of course the poem and when you read this the sculpture speaks for itself. The iron bars symbolize for example the nuclear rods, but are also symbolic of the contrast in society. The contradiction of modern times compared to the old bygone time (the time of the old farmers). The farmers who did not want to leave their territory, although they were ordered by the government (officials) to leave the area. Looking at this sculpture it feels orderly but also capricious to me.

Some report to me; looking at the sculpture words shoot within me, such as: rough, dry, old wood / new wood, incineration, radiation and no growth. That’s exactly what I’ve read and have depicted. And the beauty of this sculpture, I think is, that nature itself has made ​​what I want to depict. The nature combined with my human feelings, which I want to share.

During this (Inter)national presentations all these works form a very special list from the work itself, but it also shows the impact that a nuclear disaster evokes to the artists involved.

The participating artists will be present at the opening. Visiting hours:

More information about GAP project you can find here or on my website www.jancarelkoster.com

THE RESULT of the study:

Study of the Gogyoshi Art Project inspired on the disaster in Fukushima, Japan.